It’s a well acknowledged fact that, as a nation, the French have a penchant for being somewhat negative, pessimistic or, at best, for enjoying complaining.

For those of us who hail from more upbeat cultures this can be hard to understand. Why would anyone want to dwell so much on the negative aspects of life? The answer may simply be a question of perspective and a different, more critical approach to facing what life throws at us.

At least part of Gallic negativity surely stems from their upbringing. The French are educated and encouraged to be critical thinkers, to cultivate independence of thought and freedom of speech. This means that their ‘no holds barred’ manner of expression can often shock those used to more tempered speech. What our hosts here consider perfectly honest and factual comment often comes across to us as being too critical and complaining. Conversely, I have, on more than one occasion, been accused of hypocrisy by French friends and colleagues when simply trying to express an idea or opinion in the customary British manner i.e: using politically correct and probably over-polite language.

Another aspect of the overall negative impression given, is perhaps due to the actual language they use. Have you ever noticed how often a positive idea is expressed using a negative form in French? Here are some examples of what I mean:

In fact, it is so common to use negative forms to express a positive idea that often double negatives are necessary to emphasize a negative idea: 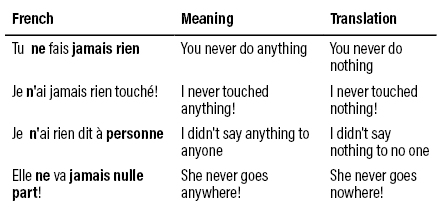