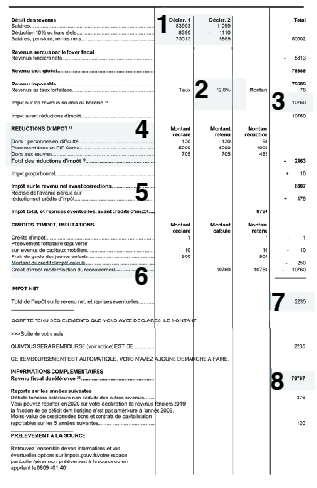 This year saw the implementation of withholding tax at source (Prélèvement à la source) which changed a lot of things and perhaps made them even more confusing than in previous years. Here are the main points to understand on your tax return.

Business income is shown separately for each member of the household.This part of the document is made up of three lines which show:
• The salary received
• The default 10% deduction that is automatically applied to all employees, or the amount of actual expenses (for employees who chose that option).
• The net salary used by the tax office to calculate the income tax rate.

NB: – It’s important to note that since the introduction of withholding tax at source (Prélèvement à la source PAS.) employers have become the collectors of a provision on income tax, which they pay on directly to the tax authorities.

• The rate of tax applied isn’t shown on the tax return but can be found in the household’s online account on www.impots.gouv.fr

The income is shown for each declared member of the household (declarant 1 / declarant 2) which means that a different rate can be applied for each, if that’s how they chose to be taxed.

For the example shown on the left, there are two possible options:
The couple could choose to have a rate calculated per individual, in which case the rate for declarant 1 is equivalent to 12.8% and the rate for declarant 2 is 0% (the second declarant would be non-taxable if he declared his revenues alone.) Or, if no option was selected, the tax office would apply a similar rate to both members of the tax household: 11.3%.

12.8% is the flat-rate for income tax (prélèvement forfaitaire unique (PFU)). It has been applied since 1st January 2018, to all income from movable property: interest, dividends and capital gains.Tax authorities apply the PFU by default unless declarants choose to be taxed using the rate on the income tax scale.

This is the amount of tax calculated by the tax authorities before any tax reductions and credits are applied.

Tax reductions and credits only reduce the amount of tax from the progressive income tax scale.

In January 2019 a provisional 60 % payment was paid to households eligible for tax credits or reductions based on their fiscal situation in 2017.

In our example, the sum of 479 euros corresponds to the tax credit advance that was paid in January to the household for 2017 expenses.

But this spring’s declaration made a correction based on the expenses incurred in 2018. Thus, it is noted below (just above point 6) in the line «childcare costs» that the household declared 500 euros of expenses for the year 2018, which at the rate of 50% opens up 250 euros of tax credit.

With the transition to withholding tax at source, the government has set up a tax «credit d’impôt pour la modernisation du recouvrement» (CIMR) for 2019. (A credit for modernizing tax collection).

Households couldn’t be taxed twice, i.e: for their revenues in 2018 and 2019, both of which are affected by the reform.

In our case, the CIMR corresponds to income tax before tax reductions and credits (10,760 euros) because 100% of the income subject to the scale in 2018 was income covered by the reform (salaries and wages). If the tax year had been a classic one, the taxpayer would have paid 8,525 euros for the 2018 IR (impot sur les revenues).

In the example shown, the 2,235 euros is the amount the government will refund to the taxpayer.
Why? Due to the blank tax year, regular income is not taxed. The household has benefited from tax reductions and credits. The administration will reimburse the surplus. The calculation is as follows:
2,463 euros of tax reductions
+ 251 euros of tax credits
– 479 euros already paid by the tax authorities.

This gives the sum of 2,235 euros to be reimbursed by the tax authorities.

Taxpayers don’t always pay attention to this line. However, the income tax reference calculated by the tax authorities is important.

It measures the household’s resources and makes it possible to obtain, for example, social benefits or tax exemptions (income tax reductions on local taxes such as ‘taxe d’habitation’).

It is also a reference amount for certain taxes such as the exceptional contribution on high incomes called the ‘Fillon tax’.

If you find an error on your tax return, don’t panic! You can make changes up to mid-December..