France is known for its gastronomic cuisine, famous chefs, Michelin restaurants and ‘Les Gourmands’. There are a few French delicacies that almost everyone associates with France. The more adventurous tourists and expats can boast to have tried and even to have fallen in love with many of them. Here is a look at three of the most famous delicacies…

Foie Gras
I cannot but start with the oh so important ‘Foie Gras’ or fattened liver of a duck or goose which is often the glorious proud entrée of a traditional Christmas meal in France. This buttery, rich, melts-in-your mouth dish is part of the gastronomical heritage of the country but its origins are 5000 years old from the mystic land of the great pharaohs of ancient Egypt. The Egyptians discov­ered that geese overfed themselves in preparation for mi­gration, producing delicious meat and naturally fattened liver. Henceforth, they started cultivating fattened geese through the method of force feeding or ‘gavage’. From Egypt, the knowledge of Foie Gras spread throughout the Mediterranean region and has been referenced by many Greek poets like Homer between the 5-8th centuries BC. During the Roman Empire the dish was extremely pop­ular and relished in lavish banquets. After the fall of the Roman Empire, the Ashkenazi Jews kept the recipe for the dish and it became a staple in Palestine. Those that migrated to Europe brought this knowledge with them.

In France, the knowledge of Foie Gras did exist during the Renaissance in classical cookbooks, however, it was in the French royal court during the 17th and 18th centuries that the dish became a rave and was considered a jewel of French gastronomy. After the revolution, when the concept of restaurants started emerging, the bour­geoisie became the new patrons in place of the aristocrats. Today, France is the largest producer and consumer of Foie Gras in the world, with 90% of production coming from the Périgord region. 95% of Foie Gras is made from duck and the rest from geese. Though this luxury item is a star feature for international celebrity chefs practicing French cuisine like Gordon Ramsay, the item today is also shrouded in controversy. The method of preparing it by force feeding the ducks with a metal tube until their liver grows 10 times larger, is an animal welfare concern and banned in many countries. In France though the appetite for this delicacy continues to be insatiable.

Snails
Snails are a popular appetizer cooked with garlic and pars­ley butter in France and the French consume 40,000 tons of snails per year. There are 180 varieties of edible snails but only two are most widely enjoyed, the ‘Escargot de Bourgogne’ and the ‘Escargot petit gris’. One may think that France was the first country to enjoy eating snails, but the custom actu­ally dates back to prehistoric times and to the Romans who popularized it throughout the Mediterranean region. After the Second World War, the demand for snails increased in France and French prisoners of war are said to have sur­vived starvation in the German camps on them. 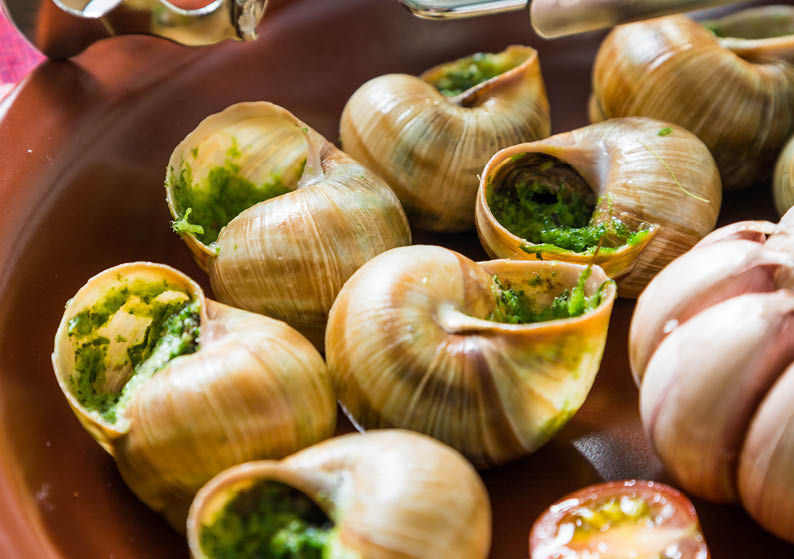 Frog Legs
Frog legs have been popular in China and other parts of Asia since the 5th cen­tury AD. Even the Aztecs in South America took a shine to them and they feature in Southern Cajun cooking in the States. However in Europe, frog legs as a delicacy originated with the Catholic Church in France. Accused of growing too fat, it was monks who devised frogs as a clever substitute for meat and had them qualified as a fish item. Briefly, frog became a sur­prise hit of the season in Britain when the famous chef Auguste Escoffier served up a dish he called ‘Thighs of the Dawn Nymphs’, at a grande soirée in honour of the Prince of Wales at London’s Savoy hotel in 1908. The culinary love for frogs is long forgotten in Britain but the 16th century-old insult of calling the French “Frogs” still continues. In France, frog legs are a traditional dish particularly in the region of the Dombes, and are found on Parisi­an menus served with garlic and parsley butter or fried in a batter. Interestingly though, frogs are a protected species in France and are in fact imported from Asia. 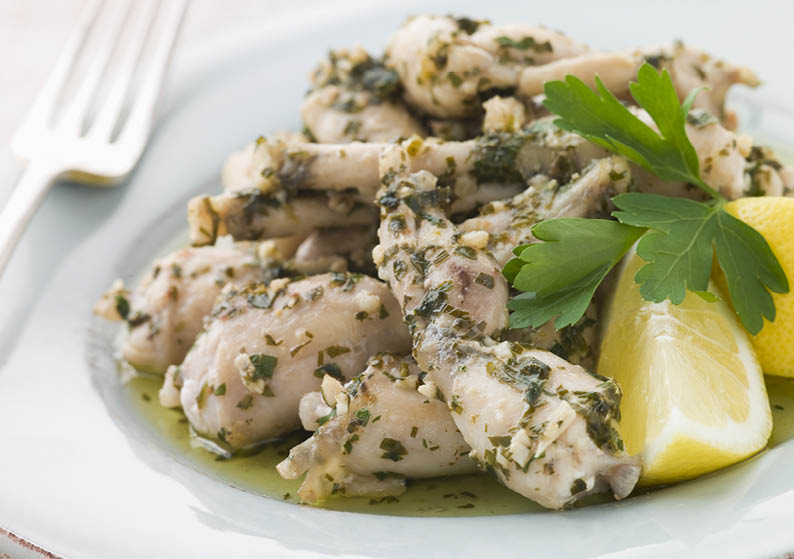 About Subarna Ganguly 7 Articles
Subarna is an Indian expat from Calcutta and has been living in France for more than 7 years. Coming from a family of artists and litterateurs, writing is one of her many creative passions. Subarna has written for several English national newspapers like the Indian Express, Telegraph and the Statesman. She holds a Bachelors degree in English Literature and a Master in Journalism and Mass Communication where she topped her University. She was also the only Journalism student selected by the Japanese Government to represent her country in Japan as a cultural youth ambassador for the prestigious Jenesys program in 2008. Subarna went on to complete her second Master in Global Management from Rouen Business School in Normandy, France. During this time she also had management training in the University of Richmond, United States. She was offered an Internship with the United Nations in New York for their Advocacy and Outreach department but chose instead to continue her internship with Infosys, a global multinational company in the field of Information technology, where she currently works in Human Resources as Senior Associate since 2010. In her HR role in Infosys she uses her specialised knowledge in Cross Cultural studies, a subject in which she completed her thesis, to help employees and new hires of different nationalities integrate in the company. Subarna is also a passionate globe trotter and has travelled extensively from a young age through the North Americas, Africa, Asia and Europe. She has a great love for the stage and has been featured in many newspapers for her performances in theatre, music and dance. She believes in drinking life to the lees and her attitude to life echoes the words of her favourite Tennyson creation Ulysses who says-‘’ I am a part of all that I have met, yet all experience is an arch wherethro’ gleams that untravelled world whose margin fades forever and forever when I move...”
LinkedIn