This spring brings an inspiring breath of fresh air to Paris with the visit of Gawad Kalinga’s founder Tony Meloto. Lovingly known as Tito Tony (Uncle Tony) by the community he serves, Mr. Meloto formed Gawad Kalinga (GK) to help give back the Philippines to its people. His insights and heart-centered business savvy created a community that empowers the country’s poor through social entrepreneurship, putting the destiny of their lives back into his people’s hands. His work is celebrated around the world as a model for all developing countries to follow.

France is one of the most dedicated, donating countries. Most of the interns and volunteers in GK come from France and the Seed School (The School for Experiential and Entrepreneurial Development) in GK is co-run by a French graduate student. Even President Holland, on a recent trip to the Philippines, made a point of meeting Mr. Meloto and commending him on his work. 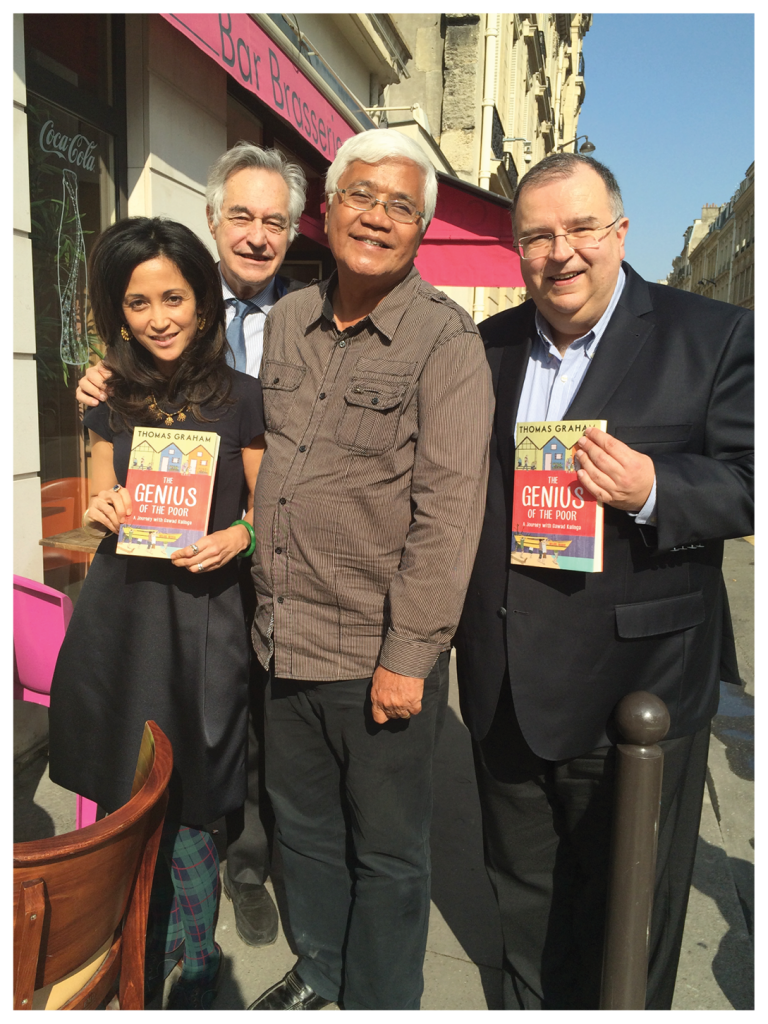 To document and share Mr. Meloto’s work, author Thomas Graham recently wrote Genius of the Poor – A journey with Gawad Kalinga. The French language version of the book is released in May and Mr. Meloto is coming to Paris to help share the book’s message and to visit companies and business schools that support the GK efforts. To thank “Paris for the Philippines” (PFTP), a group created to support the thousands of people who lost their homes to Typhoon Haiyan in 2013, Mr. Meloto has also agreed to participate in a very special Spring Fête for Love on May 17th where he will be signing books and giving a talk on GK’s work. The fête is open to the public and all profits from ticket sales will be donated to Gawad Kalinga.

The partnership between PFTP, led by President Michelle Pozon, and Gawad Kalinga has already led to 10 new homes being built in the Philippines.

Ms. Pozon explains, “Gawad Kalinga is like no other place I’ve been. It is a place of purpose where people from different walks of life come to be of service and lift those with less than little, to a place of dignity and hope. In turn, those who come to “save” are themselves rescued, by seeing that dreams can actually come true for the poorest of the poor, and that their contributions make a profound difference in the lives of others. People previously homeless, are now living in homes that they built themselves alongside those who brought the technology and knowhow. In turn, those from “developed” countries are coming into contact with the genius of those who thought they had nothing to offer. GK is a community in which “rich” and “poor” learn from and serve each other toward a common goal. We cannot truly be rich, if our country is poor.”

The Philippine economy is the second fastest growing economy in the world, just behind China. The country has the potential to grow in a sustainable fashion or to use corrupt models which destroy the land and leave the poor in a miserable situation. GK works to bring the land back to the people, instead of selling it off to developers who widen the economic divide. “To eradicate poverty in the Philippines, we need to dream big”, explains Mr Meloto, “Social entrepreneurship brings the vision, experience and access to the market of the rich to unlock the genius of the poor – imagine how explosive that combination can be!”

Spring Fête for Love with Paris for the Philippines & Gawad Kalinga Founder Tony Meloto
Who: Anyone interested in social entrepreneurship and eradicating poverty
What: An enlightening meeting with GK founder Tony Meloto and PFTP
When: May 17th 2015, 11h – 14h
Where: Bombolo Restaurant – 51 rue Basfroi, 75011 Paris
Why: To celebrate a worthy cause while having a good time
How: Write to parisforthephilippines@yahoo.fr to reserve your 15€ tickets

About Dawn Z.Bournand 7 Articles
Business and life coach, speaker, author and radio show host who believes that if you are not living a life you love, perhaps it is time to make a change. To learn more about her company, Fabulously Successful: www.fabulouslysuccessful.com
Website Facebook Twitter