As a non-French speaking expat in Paris there is much I feel alienated from within the rich and expansive French culture. There are certain aspects of French civilization that require an extensive understanding of the French language, which I do not have, and others that simply require the use of your senses. All you need is an obliging palate to partake in the rich and powerful flavours of a tête de cochon that has been roasted and cooked three ways in the course of three days, and eyes that see are all that are needed to experience the deeply emotional impact of the Albert Sisley paintings hanging amongst other masterpieces on the walls of the Musée d’Orsay.

Still, I remain unsatisfied. What is one to do at night when there are no parties on the calendar and the cabaret shows have lost their appeal since one realises they reflect more of the tourist appetite than true French culture? Well, there is French theatre, French comedy, the few, yet exhilarating, historical musicals that are all in French. I am left longing and impatient with my language-learning abilities. There is a reason the French hold tightly to their language of romance and song; it is the crux and heart of France. Though it will take me a lifetime of learning to never quite master the nuances of such a multi-dimensional language, I’d still like the opportunity to partake in the experience of French theatre. There are over 300 theatres in Paris giving performances of age old tales, comedies of poignant French humour and romances that have been borrowed by many other nations. The theatre is an area of French culture rich in nuances of behaviour, beliefs, values, humour and love in a way that only the French can love. I want to sit amongst the French, in historically monumented theatres and enjoy theatre the way they do, right here in Paris… Now I can, and so can you!

Theatre in Paris is a tourism company that makes it possible for non-French speaking individuals to partake in exquisite French theatre through the use of surtitles in foreign languages. Christophe Plotard, Romain Beytout and Carl De Poncins started Theatre in Paris in order to open the doors to the magic of French theatre to those who have previously been kept out by a language barrier. In the company’s short 18 months of life, they have already welcomed audiences from over 50 nationalities. When tickets are bought through TheatreinParis.com one not only will be guaranteed an exquisite French theatre experience with a translation surtitling the play, but will also be welcomed by a host on entering the theatre who will show you to your premium seats. The host will extend a greeting along with a brief instruction and history of the theatre itself. There are many historical theatres in Paris full of stories and timeless elegance. Exclusive seats in the best section of the theatre, as well as a program in English, are guaranteed through Theatre in Paris, extending the full theatre going experience as the French enjoy it. With up to 100 performances available every month, the doors to the magic of French theatre are now open to you.

Theatre in Paris is the exclusive reseller for surtitled performances of: 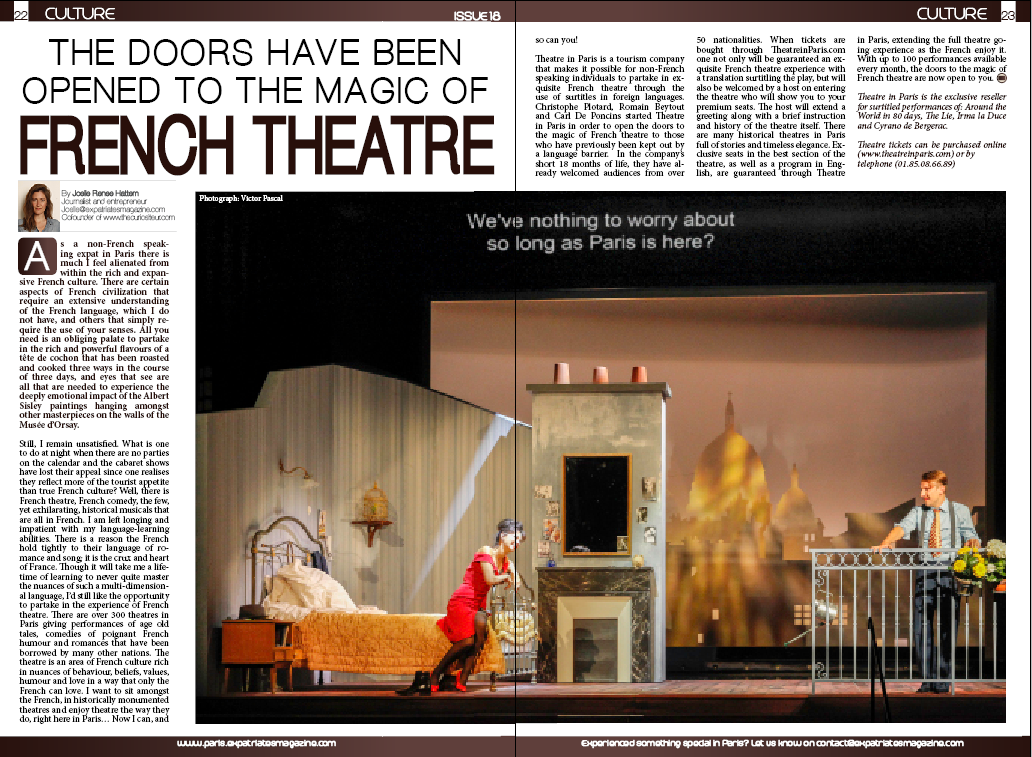