I don’t understand why my children won’t speak English with me. I speak to them in English, and they can obviously understand what I’m saying, but they always answer in French now!” A friend was complaining that no matter how hard she tried, her children, who had always replied so sweetly in “baby English” when they were younger, no longer used their mother tongue at home, but insisted on only speaking French. Well, just a few years on, one of them is now studying for a degree in Business Studies at a university in the UK and the other is thoroughly enjoying superior status in his “Anglais Européen” classes at school.

We all go through those phases where we just want to belong to a particular group, and it is quite common and only natural for expat children living in France to want to be like their school friends, to feel that they “fit in” here. Very young children don’t have the self-consciousness that can be such a hurdle to being different, but once they do acquire it there are periods of life when it completely determines everything they do, what they wear, how they act and how they speak …. I remember many occasions when my own children would hiss at me “Arrête de parler anglais maman – on nous regarde” (“Stop speaking English mum – people are looking at us”), or when I was asked not to speak to the English teacher at parent teachers evening in case my accent gave me away! Imagine the embarrassment that would cause them the next day if the teacher actually knew they had dual nationality. Suddenly all of those fairly decent marks in English would seem somehow less well earned! 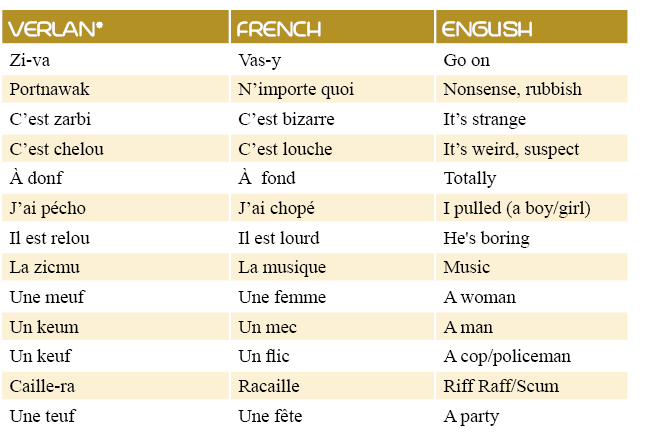 A lot of the expressions they use are based on “Verlan”* a French slang whereby syllables in a word are switched, often reversed, to make a new word.

As my children have grown older I can see that they understand the advantages because each language brings with it a different approach to life; how you express a feeling or describe a situation in another language can make subtle differences to interpretation, which has the advantage of making you see life slightly differently depending on the language you use. Sometimes this can be a good thing.

French Slang
As well as having to deal with my children’s choice of using English or French, I have also had to learn a whole other language to be able to understand them when they talk with their friends.