A few years ago, I was at the office during one of the heat-waves that Paris enjoys at least once a summer.  Our office was on the 5th floor and was ‘orientation ‘l’ouest’ (west-facing), so it got the afternoon sun and became a veritable fournaise (furnace) in the summertime.  One day it got so hot that I could no longer work, so I reached to turn on the air-conditioning (“la climatisation” ou “la clim” for short).  My colleague immediately stopped me and said, “Oh non, je n’aime pas la clim – cela me rend malade” (“Oh no, I don’t like air-conditioning – it makes me sick”.)  And with those little words, which I have come to hear so often, everything changed.

For some reason, in France a majority of people seem to be convinced that “la clim” is making them sick.  I had never heard this before.  Where I come from (Australia), air-conditioning is essential to get through our long, hot, dry summers.  I had always grown up with it and never once suspected that it may have been the cause of my recurring summer head colds.  So when I heard about the air-conditioning thing, it really stuck with me.

Those of you who know me well will not be surprised.  I am a notorious hypochondriac.  So much so that my high school friends nick-named me “Colin”, after the pale, sickly little boy in the Secret Garden who wanted to stay inside with the curtains drawn to “keep out the spores”, until one day the other children rolled him out into the garden in his wicker wheelchair.

To this day, if ever anyone tells me that they are sick or coming down with something, I immediately start edging away from them.  Sometimes in France when you go to give people la bise (a kiss to say hello), they stop you and say, “Je te fais pas la bise car je suis enrhumé / je suis malade / etc.”  (“I won’t kiss you because I have a cold / I’m sick, etc.”).  I love these people; selflessly trying to protect others from catching their illness.  But in the moment, I immediately jump back a few paces and then try to avoid them as much as possible for the rest of our encounter.

In the same vein, another ailment which I never knew I had until the French told me about it was “les jambes lourdes” (heavy legs).  Emma Beddington describes this phenomenon perfectly in her fabulous book We’ll Always Have Paris.  Basically, in France, people (generally women above a certain age) are obsessed with the idea that your legs get heavy due to poor circulation.  In Australia, this is not really a thing (or if it is, I had certainly never heard of it).  But as soon as I caught wind of this jambes lourdes thing, I knew they were onto something.  And sure enough, a trip to the médecin confirmed that I should be wearing compression socks all year round and low, thick-heeled (man-style) shoes to counter my condition. Très sexy.

So all of this made me think that maybe I’d found my natural home in France, which might just be a country of hypochondriacs. And even more so in Paris, which is undoubtedly a city of pharmacies.

Many an expat has written about the French obsession with pharmacies (including Ms. Beddington herself).  It is true that in Paris it is rare to find yourself on a street where you cannot locate at least one green, neon pharmacy cross (often accompanied by a wildly inaccurate temperature sign) within your field of vision.  (Side note: I recently met a fellow Australian who told me a drinking game that comedian Paul Taylor had created around this concept, involving google maps).  By way of example, I have at least 13 pharmacies within a 1km radius of my apartment, including the oldest pharmacy in Paris, just one of the many must-see destinations in my neighbourhood.

Thus, whenever I am exposed to la clim (some shops and restaurants insist on it, and even proudly announce “salle climatisée” on their front windows, I assume mainly to pander to the oblivious tourist crowd), or when I’ve attrapé froid (literally, “caught cold” but not necessarily a cold … yet.  In other words, basically my condition 50% of the time), I go to one of my nearest pharmacies.  That is when the real fun begins.

All of the clichés are true: if you go into a French pharmacy complaining about a sore throat you will walk out with at least a throat gargle, a spray, aspirin and/or paracetamol, lozenges, cold and flu tablets and maybe even some sort of product in suppositoire form if you’re not careful (yes, a pharmacist recently tried to give me codeine in the form of a suppository to treat a cough.  I had to ask him three times to be sure of what he was talking about, including some Bridget Jones-style gesticulating, before bashfully declining).  And of course no trip to the pharmacy would be complete without some sort of cream for “les jambes lourdes“, a travel-sized Bioderma eau micellaire, some hand cream, a Labello and a few other strict necessities.

One of my favourite pharmacy products is Oscillococcinum, although I can never remember its name and mumble something like “le oscocilium truc”, pointing over the pharmacist’s shoulder into the “products for suckers” section.  (*Note: this is not a sponsored post for Oscillococcinum, but I would be totally open to that).  As far as I know it has no proven benefits, but since I took it once and my rhume didn’t materialize, I became convinced it was a miracle drug and take it every time I feel another HC (Head Cold) descending.

And here I’m just talking about over-the-counter products.  If you have a Carte Vitale (public health care card), maybe even a Carte Mutuelle (private health care card) and go to the médecin and get yourself an ordonnance (prescription) – well, that opens up a whole new world of pharmaceutical possibilities (and indeed could be a blog post on its own).

La clim season is now firmly upon us.  I now have a new office (hélas, sans office-mate), which is orientation sud (south-facing), and also gets super hot in the summer.  Yet, I stubbornly refuse to put on the clim.  Instead, I close the windows, draw the curtains (Colin-style), turn off the lights and put on my fan, causing some colleagues to call my office “la tannière” (“the lair”).  Others just call it “le sauna” and hover at the door, not daring to enter.  If ever anyone asks me why I don’t just put on the clim, I knowingly repeat what my office-mate told me all of those years ago (“Non je n’aime pas la clim – cela te rend malade”), and they nod their heads sagely and say, “Oui tu as bien raison.” (“Yes, you’re completely right.”) 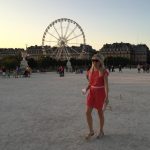 By Diana Bowman,
Diana Bowman is a fully Australian, recently-French citizen who has been based in Paris since mid-2010.  She is the author of Turning Parisian, blog about those moments when you realise you’re becoming that little bit more Parisian
Follow Diana on Instagram and Facebook

I Moved Abroad for Love. Here’s What I Want You To Know.

7th June 2019 Monica Cisneros Uncategorised Comments Off on I Moved Abroad for Love. Here’s What I Want You To Know.

I met my husband seven years ago. One year into our relationship he asked me a question that would change our lives. Would I follow him to Indonesia? Here’s what I want you to know about being an expat partner. […]