Lucy’s Christmas letter to Santa didn’t take long to write this year, but what she wrote was one of the sweetest letters Santa will receive . We hope he can deliver what she asks for…

“The big fat guy has sent his magazines for us to choose our presents” chimes in Lucy (tadpole 2).

And so commenced the annual circling of every toy available in the magazines that the supermarkets and toy stores have sent out, tadpoles 2 and 3 arguing over who can have which Barbie because they can’t possibly have the same one and who gets the latest Monster High doll and who can have make up and who can’t poke me in the eyes now.

You know as soon as the bickering has stopped that the tadpoles lists are complete and the furious letter writing has begun. Only this year something I would never have thought happened, my oldest daugh -ter took all of 2 minutes to write her letter. She placed it on the chimney and began to help her little sister to write hers. This left me completely baffled because tadpole 2’s list is always massive. Hummmm…Darn it! I would have to wait ‘til bedtime before I could get my hands on her letter.

Every year, tadpole number 1 likes to go through the girls list’s and calculate how much it would cost if we bought everything the girls have asked Santa for. Last year tadpole number 2’s list hit just under 1000 euros and tadpole number 3, bless her heart, came in at a whopping 1645 euros .

A few years ago we sat the kids down and told them that Santa has a budget for each child he has to deliver gifts to on Christmas eve and that if children were too greedy poor Rudolph and his furry four-legged friends would never get the sleigh off the ground would mean no gifts at all “unless San-ta goes on a diet and stops eating all the cookies left out for him” pipes up tadpole1.

So we get to bedtime and everyone checks their private letters to the jolly big man are placed on the chimney ready to be collected by one of the elves. Once the kids are tucked up in bed and have been there about an hour mummy elf comes along and opens each letter.

Tadpole 1 and tadpole 3’s letters are pretty standard with things they would like and plenty of pleases and thank you’s.Then came tadpole number 2’s letter which blew me away….

For Christmas I would like you to bring a Doc Mc stuffing’s doll for Lauren, Sky landers trap force for Eliott and lots and
lots and lots of chocolate for mum and dad because a happy family is the best present ever ! 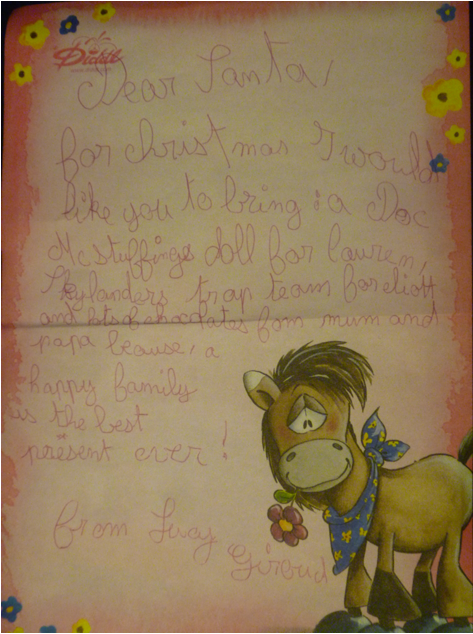 Kerry Giroud, her husband (aka Mr Frog) and with their three tadpoles live in Fontainebleau, France.