A few months ago, I was fortunate enough to meet with painter, bookmaker, furniture designer, and business owner Liba Stambollion to discuss her many artistic outlets, her business prowess and her provocative views of today’s art world.

We’re in Paris, but where are you from originally?
I was born in the United States. I moved to Singapore, the Philippines, Hong Kong, and Indonesia. I returned to the US as a teenager. Now, I’ve lived in Paris for twenty-three years.

Can you tell us about your art?
I wear three hats: painter, bookmaker, and furniture designer. I describe myself as a painter-designer, but painting is my favorite thing to do.

After coming to France, did you continue painting?
In the beginning I concentrated on developing Matahati, which is a furniture design company I have with my husband. It wasn’t until my kids grew up that I re-found myself.

Is there a main theme to your furniture design?
We use eco-friendly materials. The design is often influenced by the materials used to make the furniture. We have influences from all over the world, but the biggest are the arts and crafts movements from the early 20th century. 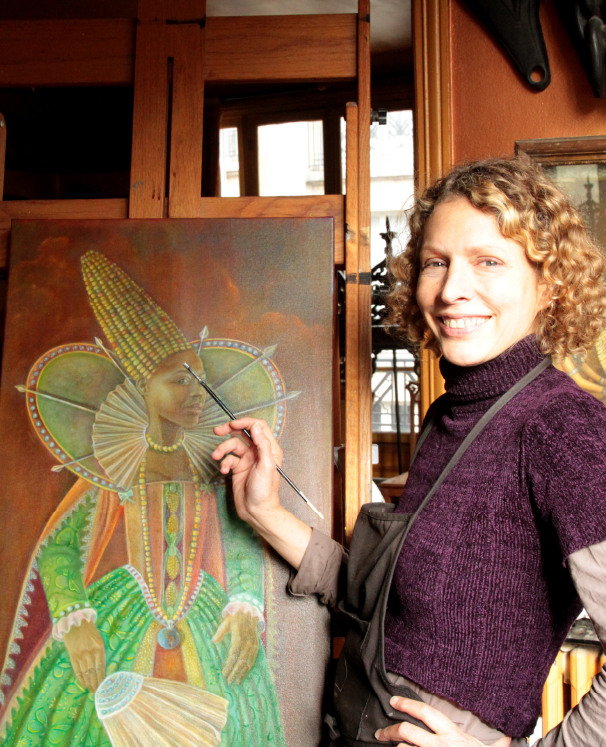 You have described yourself as an artist since you were a child. Who are some of the artists who influenced you the most?
I really love the Flemish primitives. I also like the visionary movement, surrealists, the lowbrow art movement, and pop/surrealists. All of them excite me.

Has your art changed since you’ve been living in Paris?
My art has changed a lot in the last five years. I think it was due to me maturing as a person, but that includes living in France.

Have you felt welcomed in the artistic community here?
Even though painting is coming back, it’s been out of the mode for a long time. So I’m only just re-finding my community, little by little here.

Is there a Parisian style of painting?
I don’t see Paris as having a particular style of painting right now. Paris is much more oriented toward conceptual ideas or minimalist art, but the rest of France is not like that.

How is the increasing mix of different cultures affecting art?
Paris and other big cities that I’ve lived in aren’t the same. They are international; there’s so many influences from all over the world that it does not necessarily reflect the rest of its country.

Can you tell us about your books?
My first printed book was done in collaboration with another artist. It was an erotic fairy tale. Then I got involved with a group of artists who did visionary and magic realism. This was very inspiring and exciting, and I made three books with artists from that group, the first being a book called Dreams and Divinities, which later became the name of my publishing company and group. Basically, I unite artists around a theme, and then I create a book with all their submissions. The last book had 120 artists participating. We describe a fantastical garden, which we call the “Garden of Fernal Delights.” It’s kind of like the garden of the heart. It’s an encyclopedia of this garden, all the different ideas related to it and behind it.

Interviewed by Keyvan Golestaneh. Keyvan is a Natural and Chinese medical practitioner, herbalist, body worker and psychotherapist who offers consultations both in person and long-distance
www.ConsciousHealthInstitute.org
www.NewWorldMedicine.net