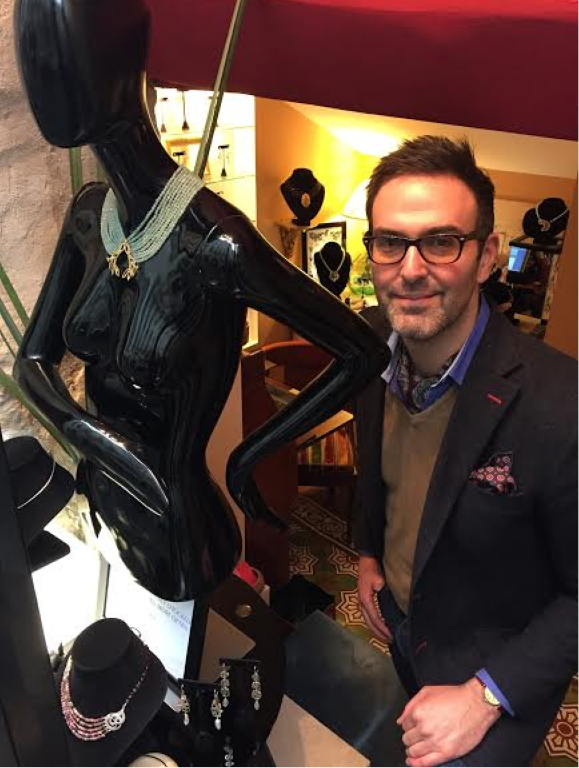 I’ll never forget the day I met John Agee. Venturing inside for a closer look at the beautiful, original jewelry I saw in a passing window, I asked the proprietor in halting French, “Parlez-vous anglais?, and when he responded, “I should I’m from Texas”, I knew that I had found a kindred spirit. Thereafter, I visited John occasionally during my month’s stay in Paris, which only confirmed my original assessment. I consider ours to be a fated meeting and one of the most pivotal in my life. His insights into expat life, advice and most of all, encouragement were instrumental in my taking the leap of faith necessary to relocate to Paris. I have never regretted this decision and credit John with giving me the confidence to follow my dream. That is why I am so pleased to introduce you to my “first Parisian friend”.

You grew up in Austin, Texas, studied at Parson’s School of Design in New York and honed your skills in Los Angeles, so why open your jewelry boutique in Paris?

Living in Paris has been a lifelong dream. I realize now the seed was planted when I first visited the city with my family on “The Grand Tour” of Europe. I was overwhelmed by the beauty of the city, and even at the early age of 10, began to realize there was a big world out there beyond the confines of The United States. Once I became a designer, I knew that owning my own shop was inevitable. I really enjoy the day-to-day aspects of being a designer, especially meeting clients. As my career progressed, I realized it was time for a bold move. My partner, Luis, and I had been traveling to France a lot and Paris was always our only choice. It’s by far the most cultured place I’ve ever been, and knowing that it’s the most visited city on earth made it a logical crossroads for the kind of upscale, worldly clientele I was trying to reach.

You’ve mentioned that you first studied fashion design and initially worked in that industry, what lessons did you learn from this experience and what influence does this bring to bear on your jewelry designs?

I suppose because I went to a “fashion” school, there’s always a bit of glamour attached to everything I do. I’ve been able to take everything I learned in fashion and apply it to jewelry design particularly, the way one goes about creating a collection. The two are linked however, I think that a luxury client places more value on jewelry than she does on clothing simply because it lasts longer. One can take more chances designing jewelry than one can with clothing. I now apply the same rigor to creating a piece of jewelry, whether it be a necklace, bracelet, pin or earrings, as I once did to a fashion line.

Do you have any style icons that influence your designs?

There’s a whole pantheon but I prefer taking inspiration from real women rather than having some “ideal”, as many designers do. Diana Vreeland (former editor-in-chief of American Vogue, 1962-1971) is clearly the frontrunner for a few simple reasons: she was immensely interested in everything going on around her; always maintained an incredibly high taste level; was a hell of a lot of fun and “a true original”. Another is actress Marisa Berenson. She epitomizes that kind of chic jet-set yet off-handed style that I’ve always admired.

Can you describe your design process and what makes your items unique?

About 80% are one-of-a-kind and the remaining pieces are what I humorously call my “Greatest Hits”. I have so many design ideas that I usually prefer trying something new. However, the businessman in me realizes that catering to clients may demand repetition when you have a hit on your hands. I don’t like to over think design. First I just sit down with my brushes and paint and let the creativity flow and then I refine them into scale drawings that are sent to the atelier. I joke that they’re glamorous Rorschach tests! The shapes are non-representational allowing for an individual interpretation by the client or the observer which gives them their uniqueness.

You have been in business for 8 years, I can imagine that getting started was problematic. Can you offer some advice on possible pitfalls to those who might want to follow in your footsteps?

Problematic” would be a diplomatic way of putting it. As an American, you have to put aside this notion, “If we were in the US, it would be done this way.” If one has a creative spirit, I think France can be a very gratifying place to live and work. However, there can be many pitfalls and one must do the research beforehand. I visited Paris often, met countless people, developed a business strategy and immersed myself in the culture before taking the “plunge”. I also paid for professional advice (lawyers, accountants, and the like) which is something I cannot emphasize enough. Creating a professional infrastructure was one of the smartest things I ever did.

What changes in the marketplace have occurred during your years in business? In what way, has this altered the product and services that you provide?

I opened my shop in 2006, so I had already been here for a couple of years when the crash happened. The uncertainty it created is still being felt in every artistic field. The positive side is that it can potentially allow for the exploration of new creative expression as it has in my case. Previously my style was more over-the-top with larger statement pieces whereas now the scale has become somewhat smaller. But I refuse to eliminate the glamour! Also, I’ve discovered that I needed to provide a wider range of design and price options: from very expensive, more elaborate pieces to less expensive, more wearable ones. 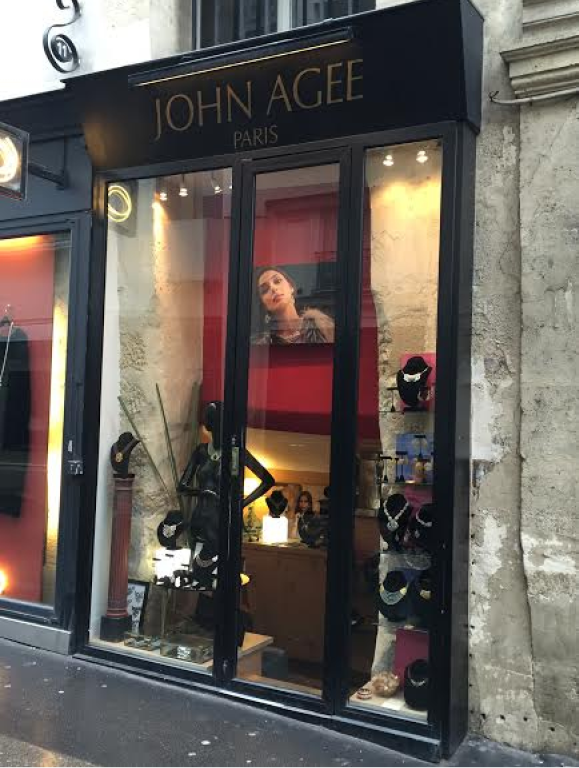 Who makes up your customer base and has it changed since the inception of your business?

I’ve always been amazed by how consistent my client base has remained throughout the years. Regardless of age or nationality, my typical client is always an interesting, well-traveled woman with a good sense of self who prefers “style” to “fashion”. She buys my work because she considers it to be a “wearable piece of art” rather than just another piece of jewelry.

What do you like best about living and working in Paris?

It’s eternally stimulating. The French have perfected the art of shameless extravagance! It’s just so beautiful that I still say to myself, “My God, that’s the Eiffel Tower!” You really feel the history. I guess it’s because I consider myself to be an old soul that Paris is such a good fit for me. Also, there’s a kind of cosmopolitan foreign tourist who is naturally attracted to Paris.

As a sole proprietor, I am sure that you have little time to yourself. How do you spend what free time you do have?

Luis and I adore entertaining, so our salon is often a hive of merrymaking! Likewise, it’s just as easy to go out to a great café, bar, or restaurant with friends here. I’m an avid reader, and I’m usually reading four or five books (history and biographies) at a time. The museums in this city are an embarrassment of riches and I try to see as many temporary exhibitions as time permits. It’s also just fun to get “lost” in Paris and see where you end up. Leave it to the French to come up with a verb for wandering aimlessly and enjoying the scene with no real end in mind: “flâner”.

About Allison Wiley 10 Articles
Former New Yorker, Allison Wiley is the founder of Paris Art & Wine Events which fosters an appreciation for art and wine through a series of unique events. With over 20 years expertise in meeting and event management, she recently formed this concern to share her passion for art, wine and Paris with expats and visitors alike. Like the composition of a piece of art or that of a fine wine, Paris Art & Wine Events blends uniqueness, creativity, a dash of local color, flawless execution and a little je ne sais quoi into all of its art and wine related events. These programs are designed to provide an insider’s look at the diverse Parisian art scene; introduce participants to its galleries, restaurants and neighborhoods; educate and inform and encourage the formation of new friendships with art and wine lovers of all ages. The professional team, directed by a certified Meeting and Event Planner, will make each event whether it is an art gallery wine tasting; art walking tour; meet the artist or artist in residence event; cooking with wine class; art & wine quiz night; art scavenger hunt;; artistic workshop or similar event fun, informative and memorable for both the individual and the corporate client.