We first met about 18 years ago at one of your now famous Sunday night dinners. How long have you lived in Paris and what made you decide to move here?
I’ve lived here since 1969, but I came to Paris for the first time in 1957. I am originally from Louisiana, U.S. It was either going to be Amsterdam, Paris or Barcelona. I was offered a professorship at The University of Paris Vincennes Saint-Denis, so I decided on Paris.

At the time, was it easy for people to come and live in France?
Yes, especially for me, because the Ministry of Education handled all the paperwork for me. I didn’t have to do anything. I got a ‘Carte de Séjour’.

Was it hard for you to adapt to living in France?
Not at all. I landed on my feet and I’ve been on my feet ever since. I’ve had wonderful places to live. The first place was a millionaire American friend’s apartment. He asked me to watch it for three months. The second place was a lovely apartment in the fifteenth arrondissement, for which I paid 600 francs a month and which was absolutely delightful, and now my current place.

Do you consider yourself an American expat, or French or both?
I consider myself a world citizen. The whole planet Earth is mine, all human history is mine, and I’m at home everywhere. I feel that, as a world citizen, I am someone who was born on the planet Earth and I’m philosophically and politically at home everywhere. I’ve edited five guidebooks to ten Eastern European countries. They contain nothing but fellow human beings you can meet. No information on hotels, restaurants, monuments or any of that stuff – it’s just a thousand people in each book whom you can meet. The books are called “People To People”. I feel that the local people know more about their city than any guidebook could possibly know. So if you go to Moscow or Belgrade…any of these cities, you can look up people there and meet them.

So you’re very much a people person?
Totally. I’ve been involved in introducing people to people ever since my first venture, which was a bookshop in Edinburgh called The Paperback. It was the first paperback bookshop in Britain. It opened in 1959. Then I started a theater, and started two parts of the Edinburgh Festival. Later in Paris I started the Sunday Salon meetings, which involved people inviting themselves here to dinner each Sunday night.That’s probably the thing I’m most famous for in Paris because they’ve been going for 37 years. 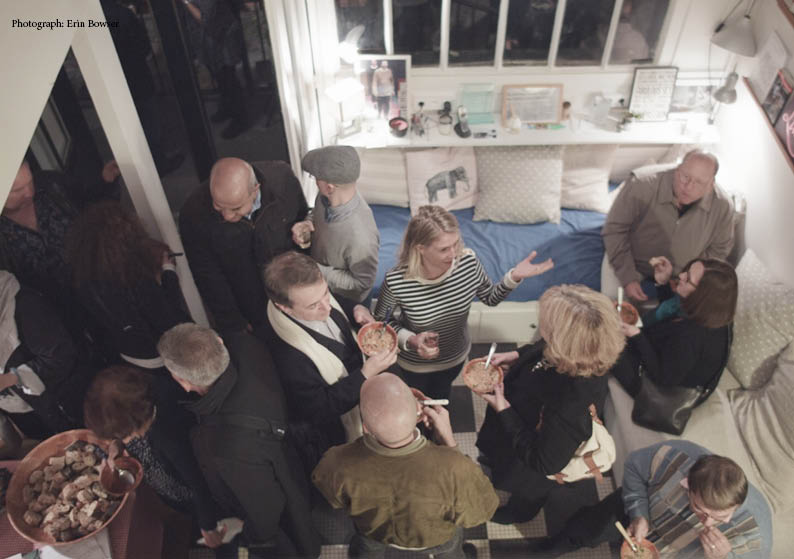 Can you tell us more about the Sunday Morning Salons?
Basically, it’s a buffet dinner held in my home, to which I invite no one, everyone invites themselves. I invite the chef, and it’s always a different chef. Sometimes it’s Mexican, or Chinese, or French – it’s always different cuisine. About sixty or seventy people come. It takes place on Sunday night and lasts for three hours. About hundred and fifty thousand people have been to dinner so far.

Do you get a lot of expats coming?
Yes, I’d say that every week there’s a small percentage of people who live in Paris who come, maybe 20%. 30% of the crowd comes from Budapest, New York, Toronto, Istanbul…everywhere in the world.

Over time have you noticed a difference in the spirit of the people attending?
No. Human beings are human beings. I act as a kind of introducer. I try to make sure that everybody meets everyone, and that no one is sitting in a corner by themselves. I’m quite good at remembering names, so I’ll say, “Jean-Pierre, do you know Isabelle?” and “Isabelle, do you know Henry?” “Henry, do you know Paul?” Countless friendships, love affairs, marriages and projects have come from this.

If somebody wants to come to one of your Sunday Salons what should they do?
They should send me a message through my website www.jim-haynes.com.

How far into the future do you anticipate doing this?
Well, I’ve done them for 37 years, I’ll do them for another 37 years, and that’s enough.