Come and join 31,000 expats in our Facebook Group – Expatriates in Paris

Brought up on a trading post in Colorado’s wild west amid Native American Indians, Jeff Berner is a true Renaissance man. He has, at different times in his life, worked as a teacher, photographer, journalist, writer, art critic, “stand-up philosopher” and high–tech consultant. He currently lives in Montmartre where he has his atelier on rue Lepic and is a regular contributor to “Montmartre à la une”. We met with him this summer to find out more about him and his approach to life as an expat in Paris.

Tell us what brought you to France originally.

I started reading French literature and looking at French art, in English, when I was a teenager and when I was about seventeen I said to my Dad, “I want to go hitchhike around Europe”. He said “Do it while you can” – which was his attitude all the time – so I did, and when I put my feet on French soil I felt I was at home.

Where did you go?

I went to St Paul de Vence in the hills above Nice and I had a wonderful time there for about a year, but then I realized “Wait a minute, I don’t have a degree”. So I went back to the States and launched my avant-garde art history course “Astronauts of Inner Space,” at the University of California, Berkley and San Francisco Extension Centres and finally got a degree.

In my courses I was teaching about this neighborhood (Montmartre), and about what happened here in around 1880. In ‘66 I came back to meet Man Ray by arrangement and I spent a day with him and Juliette here. Then 15 years ago, I said to my wife, “Why don’t we just go and live there?” So we did. We started renting in different neighborhoods down in Paris. Then one day I was walking up this street and I met the artist next door. A year later he phoned me saying “Jump in a taxi right now. The place next door is going for sale and it won’t last long”. We jumped up here and in 20 minutes we said “Bingo”! So here we are and I just love my life here.

Do you think you have to try to be like the French to be integrated?

Not to begin with certainly. However, if you’re ultimately expecting to be invited to someone’s country estate you’ll probably have to hang around longer, because the French take longer to become friends than the Americans, but once you are friends it’s the real deal! I’m here to prove it. I feel so welcome here – most especially in Montmartre. I walk around here and people say “Hi”, I don’t always know who they are, but I love it!

You do so many different things, which activity you enjoy most?

Well, if I have anything to be “proud” of it’s that I’ve been an inter-disciplinary person all my life. My parents never discouraged it. In fact, another one of the reasons I came to live in France is because Europe is where the Renaissance was born. After the Dark Ages people started to say know a little about architecture, warfare, medicine, poetry, philosophy, that way you become really human. Not necessarily so well educated, that’s not what you’re working for, you’re working to absorb an understanding.

But I love teaching and I love writing. When I was 5 years old I said to my parents “I want to be a writer”, my mother gave me a notebook and a pencil and said “write”. I started writing and I still have that notebook!

[At 26 years Jeff was the youngest byline columnist for a major newspaper in the United States writing popular intergenerational articles for the San Francisco Chronicle.] 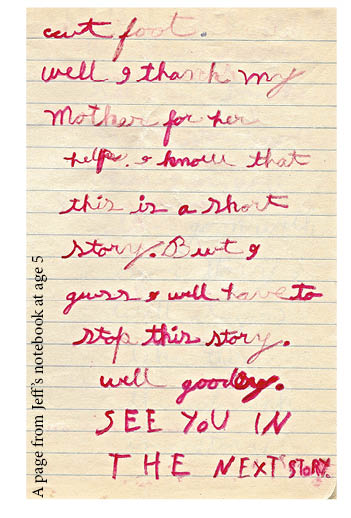 It sounds as if your parents had a great mindset.

My parents taught me to count my blessings all the time. I deeply believe the American cliché “I complained I have no shoes ‘til I saw a man who had no feet”. My parents also taught me to judge people individually, not by race or religion or gender. I’m interested in learning from everyone’s ideas and opinions.

No, no. It was contagious. I just absorbed it. In fact to this day I don’t have an academic memory. It was something I just absorbed from reading books. My teaching approach was very much one of “I’m here to learn with you” – not just blah blah and turning pages.

Do you have a regular routine?

Not at all. One of the reasons I haven’t had a book out for a while is because I’m enjoying my life so much. My social life here is so interesting, I really enjoy it. I have 12 or 13 books in works right now. One is called “Forget Your Camera”. My best-selling book was for Nikon, 19 years ago it went to 300 000 copies, so I thought, let’s spin it now. In today’s world you could take a million pictures for no extra charge, but guess what? You’re missing life!

There’s a story about the Japanese tourist who is asked “Did you have a good time in Paris?” and who says “I don’t know, I haven’t seen the pictures yet!” I say, take the picture, put the camera down and BE there. Come on! Most cultures believe that on your death bed your life flashes before your eyes…what do you want to see -snapshots? Psychologists say that when you look at your family album, you’re neurologically remembering having taken the picture, but not necessarily remembering what a hand felt like when you held it.

As well as writing you’ve also worked as a marketing consultant for some high tech companies. How did that come about?

I decided to do it! One thing I have a skill to do is to connect the dots. I majored in English, and my minor was philosophy. What my philosophy mentor (Vernon Dolphin) taught me most was that beliefs are a lousy substitute for thinking. I’m not an expert in high tech, but I did high tech brainstorming in Silicon Valley. I’m good at helping people think “outside the box”.

Jeff worked as a branding facilitator for Sun when he animated a group of 18 people in a fun and relaxed atmosphere to come up with the brand name Java. From there went on to work for other high tech companies such as Apple doing brainstorming sessions for reaching the home-office market.

Back in 1965 I was invited by the founder, George Maciunas, to join the avant-garde performance art movement FLUXUS, a small group including Yoko Ono, BEN Vautier, and others.In 1989 I sold my art ephemera collection, “Aktual Art International,” to The Walker Art Center in Minneapolis. Recently, I was happy to learn that the prototype for a cosmic board game I created in 1967, COSMOPOLY, was included in the permanent collection of The Museum of Modern Art, in New York City. I plan to finally produce the game next year.

Do you have any words of advice for readers who are trying to settle into life here in Paris?

You know, people for centuries have been saying “I love Paris”. Well, I am here to say, if you let her, she will love you in return. Let it happen. Don’t just go to Paris, bring yourself, bring your sense of humour. It’s not a French sense of humour, but just talk to people, just be with them. It’s wonderful. You may say “But I don’t speak French”, but the French didn’t speak French either until around 1850 when the French Academy said “Speak like this”. Before that the different regions didn’t exactly understand each other, so you’re at home! Relax, have fun and bring your best to the atmosphere. You have body language, you have attitude, you have présence …don’t worry!

Jeff’s current book “Creative Loitering in Paris” will be available on his website www.jeffberner.com, contact him at berner@sonic.net 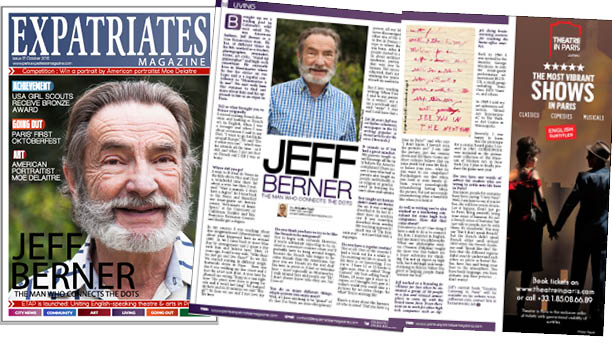 Read Jeff’s previous contributions to Expatriates Magazine here, including the popular “What is it about Paris?“

Would you like to nominate someone for Best of Paris 2019?

Where voters are coming from