I have been living just a few meters uphill from Le Moulin de la Galette, on Rue Lepic, in Montmartre for more than ten wonderful years. My atelier has large ‘vitrines’ on the street level and people from all over the world stop and say “Oh! Look at that windmill!” They take a snapshot, and immediately look away!

Walking around with their cameras, their mobile phones or iPads, they photograph every few steps, which isn’t very different from looking at the world through a keyhole! Psychologists and neurologists say that you will remember taking the picture, but not much of the wider experience itself.

If you see something amazing, go ahead and take a picture, but then forget your camera and turn looking into really seeing. Can you imagine a young man catching sight of a beautiful young woman, saying “Wow!” and then looking away?

That’s what people are doing with their surroundings all day long. They hold up equipment hiding their faces, interrupting social interactions which for thousands of years have been face to face.

Taking a picture should be just the beginning, not the end, of your delight in looking at something interesting. You turn looking into really seeing by being there with all your senses! 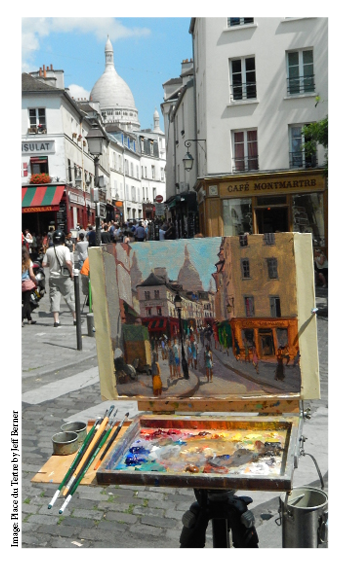 In my more than half a century of photography, – which I am guessing totals approximately 300,000 photographs, taken at 1/1000th of a second here, and 1/25th of a second there, and a lot of speeds in between- can you guess how much time I have invested in literally, mechanically, taking photographs? I believe all those split seconds total only about twelve minutes!

But before and after taking a photograph, I turn just looking into really seeing. There’s nothing to it. All you do is what people have done for thousands of years: pay attention to where you are, who you are with (or not), and what your surroundings feel like, sound like, smell like… and you will have not only interesting photographs, but living memories that can include photo albums, but do not depend on them. This is what most painters do as they stand and look and caress a canvas with brushes for a long, leisurely time, absorbing the scene.

In most cultures and religions it is believed that when one is dying life goes rolling by on the screen of imagination. If that happens to be true, do we want quick snapshots of this and that, or do we want memories of a sweetheart’s surprise kiss on the beach, climbing a mountain in the Colorado Rockies, and many other three-dimensional memories including how our feet felt on the ground, what the birds sounded like near the roaring waves of the ocean and friends laughing at a
party? 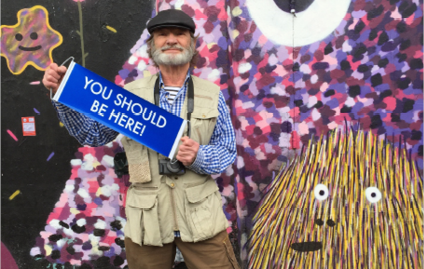 That’s not to mention all the joys to be found here in Paris and all around France, where photography was invented!

About Jeff Berner 3 Articles
Jeff Berner has been an active fine art, portrait, editorial and multimedia photographer since 1968. His work includes hot-air ballooning, portrait assignments, ocean-going yacht racing, open-heart surgery, book and magazine illustration, and travel photography. He has received a number of awards, including two consecutive portrait prizes from Life magazine. His other photography ranges from nature studies to surrealistic "Dreamspaces". He has been a member of the international conceptual/performance art group, Fluxus, since 1965. His photography is found in private and several museum collections, including The Walker Art Center (Minneapolis), and Musée Pompidou (Paris), and has appeared in magazines, such as Omni, Life, and Psychology Today. Berner has also photographed extensively in Europe and Beijing, and has just completed his most recent book, Creative Loitering in Paris, a photo-illustrated book about the people of what he calls, "the biggest small town in the world." His Paris exhibitions have included his uniquely surrealistic "Dreamspaces," in October-November 2003, at Aux Fous de l'Isle; and his reflections of Paris, "Flânerie Créatrice à Paris," at Paris Historique (The Paris Historical Society), in April-May, 2004. In 2006, his “Dreamspaces” were exhibited at Barclays Bank, boulevard Saint Germain; and in 2007, they were exhibited at Cinema “Studio 28” in Montmartre; and his "Flânerie Créatrice à Paris" photographs were shown at La Commanderie du Clos Montmartre, where he has been a chevalier since 2005. In December 2009, his impressions of Paris and his “Dreamspaces” were shown at Café le Select, in Paris. Berner is the author of numerous books, including The Photographic Experience (Doubleday/Anchor); The Nikon Touch Photography Guide (Bantam Books); The Holography Book (Avon Books); and The Innerspace Project (World Publishing). His books have has also been published in Chinese and Swedish editions. His photo-illustrated articles have appeared in each issue of Montmartre a la une magazine, in Paris, for the past several years. Some of his titles can be purchased through Amazon.com. Berner's photomontage "Dreamspaces" were used in his photo illustration and design for Uncarved Block, Unbleached Silk: The Mystery of Life (1978, A&W Visual Library, NY), a study of Zen and the sense of beauty, by Jeff's late friend, Alan Watts. Berner has taught at the historic Rudolph Schaeffer School of Design, San Francisco; at the Volcano Art Center on Hawaii's Big Island, and annually at Esalen Institute, Big Sur California, from 1990 through 2000. During that same decade he was an active high-tech and branding brainstorming consultant to Silicon Valley companies including Apple Computer, Sun Microsytems, Atari and others. He also spoke annually at Macworld Expo, San Francisco and New York. From 1965-70, he also created and conducted avant-garde art history courses, "Astronauts of Inner Space" (A Survey of the European Avant-Garde, 1880 to the present) at the University of California, Berkeley and San Francisco Extension Centers (as Extension Instructor in French Culture); and at San Francisco State University's Experimental College, and in 1967 at the San Francisco Art Institute. In his spare time he created “The Lazy JB Ranch,” a miniature diorama that was exhibited for two years in the early 1990s at The Museum of Miniatures in Los Angeles, and at Paris’ only folk-art museum, Halle Saint Pierre, at the foot of Sacre Coeur, during November, 2011. His continuing avant-garde art collecting efforts include “Aktual Art International,” shown at the San Francisco Museum of Modern Art in 1967, as well as at The Stanford University Art Gallery that same year; and as a major part of the permanent Walker Art Center, Minneapolis, Minnesota collection, “In the Spirit of Fluxus,” in 1993; and elsewhere in the USA. He lives full-time at Atelier Berner, on rue Lepic in Montmartre (Paris), with his painter wife, Azar, making occasional forays to their home in Marin County, California.
Website Facebook