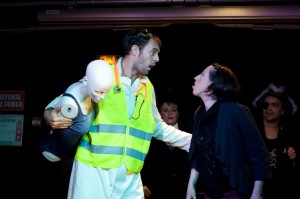 The Montmartre Dionysia festival is a showcase of original English-language theatre in Paris.

Twice a year, eight playwrights, eight directors, and upwards of 50 actors and volunteers attract hundreds of theatre-lovers to a weeklong competition to celebrate new theatre in the City of Lights.

Four original one-act plays, selected from a large number of entries, are each shown three times, competing for Best Play and Best Actor Prizes. The festival also boasts an off-competition in which previous participants are invited back to put on plays with a more experimental scope.

The fourth edition of the festival, “Fire for Yourself to Burn”, will take place from 25th to the 30th May, in two locations. First on week nights in the Petit Theatre du Bonheur, an intimate space clinging to the side of some of Montmartre’s famous steps, then in two gala evenings – one for the off-competition plays, the other for the competition itself – at the 180 seat capacity theatre, the Halle Pajol on the border of the 18th Arrondissement.

Expatriates Magazine is offering two tickets to see the competition final Saturday night performance at the Halle Pajol on the 30th May.

To enter the competition answer the following questions – the winner will be picked from the best suggestions:

If you were to put on a play about your experience as an expatriate in Paris who would you like to play your role and why?

Congratualations to Krishna Purohit who has won two tickets. the winning submission was:

Without a doubt, I would choose Kristen Bell to play me on stage. Not only is she a brilliant singer, but she also has all the sass, wit and brash American charm it takes to make it in Paris. Navigating through the bureaucracies and culture takes all the tenaciousness of  Veronica Mars and the optimistic humor of Anna in Frozen. No doormats need apply!