Irish pub the Coolin in St Germain-des-Prés is closing after twenty years, after an eviction notice was handed last year to all the shops in the Marché St-Germain to make way for the arrival of large international chains. Owner Brian is excited about the events which will be put on in the countdown to the last day and about the opportunity for fresh projects.

The Coolin has attracted a loyal following over its two decades of existence: a regular, tight-knit group of expatriates who have made friends and found a home-from-home at the pub. The Coolin’s clientele and staff are multinational; much of the clientele is French and there are very few tourists.

This family-feeling is an idiosyncrasy of the Coolin as professional painter Linda explains: ‘A lot of other Irish bars I’ve gone to are full of tourists, they’re not one big group of friends.’ Philippe, who comes very often to the pub on a Sunday and is described as one of the ‘pillars’ of this social group, says the people he met at the Coolin are both his closest friends and those he sees most often.

Linda’s career as a full-time painter was launched when she was asked by the Coolin’s manager to paint the musicians performing in the pub. She then went on to sell her paintings, and now exhibits at gallery 59 Rivoli. The Coolin has been an artistic haven for painters, musicians and writers in exile, as Linda and fellow Coolin regular Paddy Sherlock explain to me. Musician Paddy Sherlock has been playing at the pub for nineteen years and at Sunday-night concerts in Paris for thirty. Paddy explains how well the Coolin fits in with its location: ‘St Germain 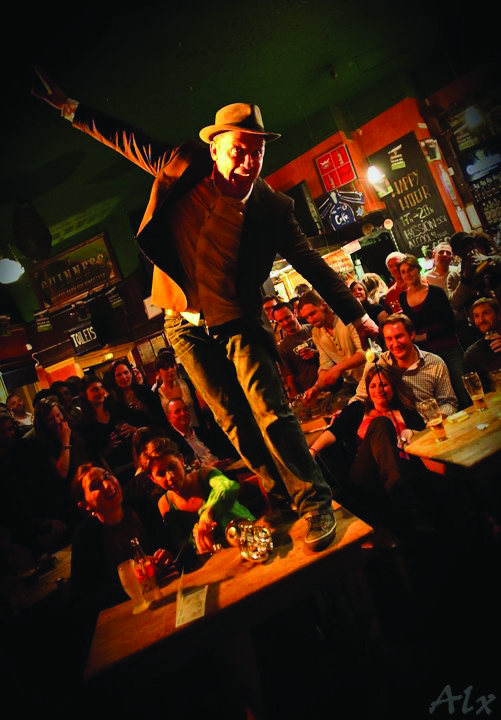 used to be a “quartier populaire”, the Latin Quarter all the way up to Notre-Dame was to be the jazz area, the place for the basement clubs with the big bands.’ Linda reminisces about the Coolin’s Sunday nights: ‘It was like a scene from a movie, with swing dancers, music, and Paddy as the host makes you feel part of the show, so it’s not as if you’re sitting watching on the sidelines but you’re part of the theatre.’

Each day and night of the week has its own character: “We have the Friday and Saturday night boy-meets-girl crew, Sunday during the day is the family crowd and those who come for brunch, and then there are jazz nights in the evening. Mondays are very successful open mic nights with twenty to thirty musicians. On Tuesdays we have live sports. To be successful a venue has to maximise its potential and not be a one-horse show.”

The Coolin is determined to celebrate the end of its twenty-year existence ‘in style’, including an exhibition of photos of characters from twenty years of the Coolin. In the pub’s penultimate week both St Patrick’s Day (17th March) and the Six Nations rubgy tournament will take place. The 21st March will be the Coolin’s final curtain, there is to be a huge farewell party as the bar stays open all night, with the interior doors of the pub opening onto the marché, a stage hosting live music and DJs and the winner of the pub’s ‘Master mic’ sessions present. “It’s going to be an enormous event,” Brian says proudly.

Brian is full of enthusiasm and ideas for fresh hospitality projects he wants to devote himself to once the pub will have closed. He is considering opening a New York-style gastro pub providing real value for money. Brian also shows me photos of the eco-hotel he wants to develop back in Kerry, with individual pods on stilts nestled in the forest ‘a top-end magical place’, overlooking the beautiful Irish scenery and a newly-created sculpture park.

Coolin à la Plage, in Horsegor, the surf capital of Europe, will stay open. The surf bar is a much more music-orientated venue, Brian explains, with music every night in the summer, but the feeling of the place is the same as the Parisian-based Coolin. ‘The feeling of a pub is the most important thing,’ he says. ‘People must feel relaxed. The owner’s relationship with the staff is also very important.’ Brian is philosophical about the end of the Coolin: ‘The pub could go on for another twenty years but we’re leaving on a high, the people who knew the Coolin will always remember it and I’ve always been told that the party should end before you want it to.’