Shipbreak, by expat Claudio Cambon, tells the story of the last voyage, dismantling, and recycling of an American merchant vessel in Bangladesh in the late 1990’s. Through both words and images, it describes how the SS Minole becomes a touchstone for many groups of people across the world: from the American shipbuilders who built her in the early 1960’s and the seamen who worked on her for almost four decades all the way to the Bangladeshi shipbreakers who took the vessel apart, more or less by hand, and the many people who incorporated the ship’s raw materials into their daily lives as part of their country’s effort to develop its infrastructure and economy. 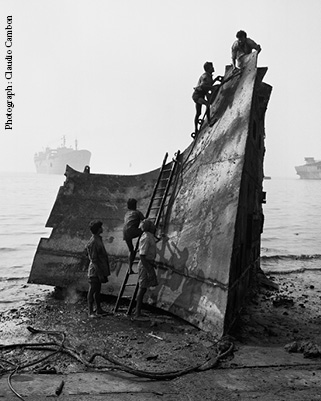 The book describes how the ship was a source of livelihood for all these individuals, whether they were engaged in the act of its creation, operation, or apparent destruction, and it draws a seemingly improbable connection between them in order to reveal a common humanity above and beyond the boundaries of space and time that appear to separate them.

Shipbreak is available this Autumn both directly from the publisher ‘Edition Patrick Frey’ and its French distributor ‘Les presses du réel‘.

Do you want to share some community news? let us know on contact@expatriatesmagazine.com