Start spreading the news…Michael Pereira has brought Broadway to Paris! A successful dancer and singer with New York City running through his veins, Michael decided to follow a nudge and move to the city he loves, Paris, to share his talents and knowledge about musical theatre. He began teaching Broadway in Paris classes a short time after arriving and hasn’t looked back since.

At the young age of 19, Michael moved from his hometown of Shelton, Connecticut to the Big Apple to pursue his dreams of becoming a Broadway performer. After graduating from a musical theater conservatory, he began working as a professional performer and went on to perform on Broadway and in national and international tours. During leaner times, Michael would teach, to both share and hone his craft. He has taught master classes in dance (Broadway Jazz, jazz and ballet) and in musical theater (combining both singing and dancing). He was also brought on as a professor at the Musical Theater Department of Marymount Manhattan College.

Broadway in Paris was created one short month after Michael’s arrival. “It was slow starting”, he says. “The first day I taught I had no one. The second day I had one person. The third none again and then the fourth I had two students. It was that day that I decided that I would teach every class as if it was packed with people. After that day, little by little, word began to spread and people started coming. Broadway in Paris commenced with only a Broadway Jazz class but I soon added ballet and private voice lessons. From there, I created two workshops. One is an American musical theater workshop where I combine all the disciplines of singing and dancing at the same time and the second is a song interpretation workshop that is broken down into sections where I teach the art of communication through song.”

According to Michael, 99% of his students are French but he loves having expats in his classes to mix things up a bit. “My style of teaching is very “up””, Michael explains. “I believe that anything is possible if you dedicate yourself to it and work hard. I am living proof of that. My French students really like my American “GO GET ‘EM” attitude they tell me it motivates them. I also deeply believe in the power of positivity…I have seen it change people right before my very eyes. Class and workshop attendees tell me this is “très amércain” of me.”

He adds, “Creatively, being here has opened me up to even more possibilities. Being in a new place, being surrounded by the beauty of this city, learning a new language… has forced me to become braver and bolder. I think that being the age that I am and learning something new every day has expanded my mind and has removed boundaries. It is important to continually challenge yourself.”

When asked about his plans for the coming year, Michael smiles and says, “I have many things in the works. Week long workshops, adding guest teachers to my workshops, bringing master teachers from Broadway here to Paris and taking a group of French performers to NYC for a workshop with teachers and professionals there. I have a couple of surprises as well, but I am not ready to reveal those just yet.”

With the recent Parisian successes of Cats and Flashdance, it looks like Michael has brought Broadway to Paris at the perfect time. He has found his audience and they are welcoming him with open arms.

This article was originally printed in issue 19 of Expatriates Magazine, see where copies are available for collection here , download the latest issue here or order back issues here 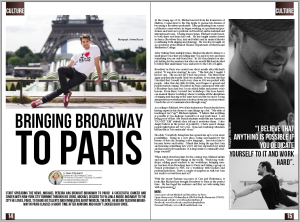 About Dawn Z.Bournand 7 Articles
Business and life coach, speaker, author and radio show host who believes that if you are not living a life you love, perhaps it is time to make a change. To learn more about her company, Fabulously Successful: www.fabulouslysuccessful.com
Website Facebook Twitter