14 mistakes you’ll probably make when learning French – but who cares? It’s all part of the fun 🙂

The awkward moment when you confuse a kiss for a F***. Next time say bisou

That strange look when it seems the conversation has moved beyond your cute kitten. Next time use the generic masculine «chat».

You’re at the boulangerie and mispronounce beaucoup and inadvertently compliment the owner’s behind. Next time practice and you’ll get this one right

You try to explain that a footballer sucks but get It all wrong. Next time say Il est nul.

You announce to everyone in the office you’re turning on the A/C because you’re hot. Next time say J’ai chaud.

When you explain that a mutual friend has inserted Into you. Instead of introduced you. Next time say M’a Présenté

The moment you ask for food without preservatives but accidentally ask without condoms. Next time Conservateurs

Love Chinese food? it’s only normal to explain you eat like a pig… but you didn’t understand that Cochonne means someone who loves sex. Next time say Je me suis gavée comme une oie.

When you accidently ask the waiter if they have jerk on the menu instead of duck. Next time say Canard

When you want to tell a friend you’re envious of them but accidently declare your desire to sleep with them. Next time say Tu as de la chance.

During the first meal with your in-laws, you’re asked if you’d like another serving, to which you announce to the whole family that you’re pregnant. Next time say Je n’ai plus faim.

You’ve Just returned from holiday and returned back to the office, your French manager asks if you enjoyed the visit, to which you enthusiastically inform them you had an orgasm. Oops. Next time say Oui je me suis bien amusé.

A special thank you to French teacher and founder of LaLangue Paris Sandrine Durand for helping us put this infographic together.
LaLangue Paris is currently offering community members a free French lesson in their Juneclasses – see the offer details here 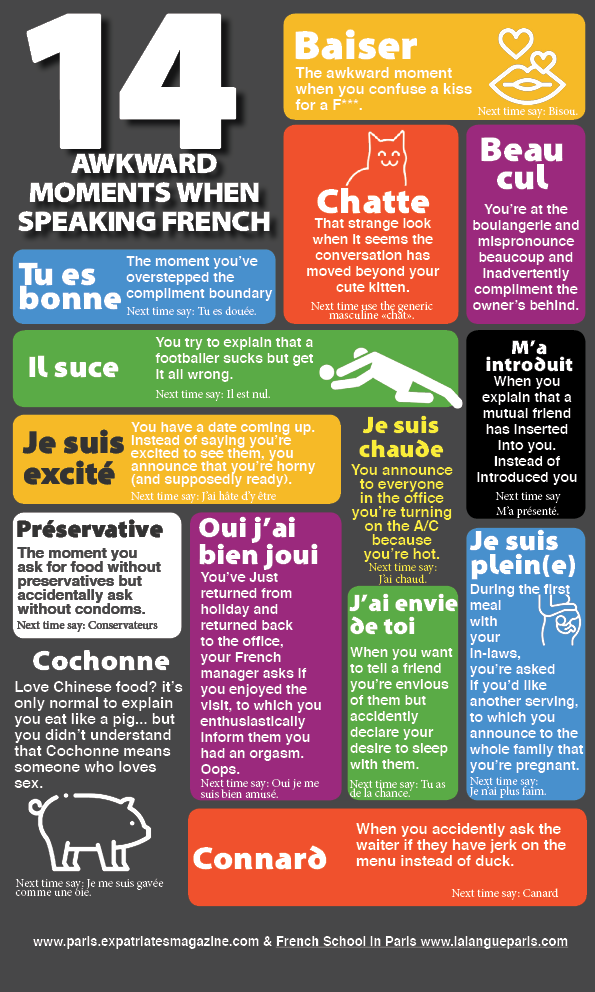